E-coaching and why it works!

One of the first objections that people express when hearing the principle of e-coaching is that they cannot imagine that it can work when you can' t see each other. This reaction can be traced back to the scientific understanding of channel reduction, in which the loss of communication channels ( physique, pitch and facial expressions) and the - for that matter different - filter model talk about similar effects as not having insights such as clothing, hairstyle, humming and more dynamic mutual clues.

In short, people appreciate the visual information they obtain in physical contact and all the more they see it as necessary for the human coaching profession. E-coaching lacks this physical and visual information. And yet, e-coaching works, in fact: e-coaching with the ABC model is underpinned by scientific theories. I've been using it in my coaching practice since 2011 and many coachees have benefited from it by speeding up, shortening, and spending less money on their coaching trajectory than with regular coaching.

This extensive article describes these scientific theories and places them in perspective of the coaching process a client goes through. We will discuss these theories in turn:

1. Three pillars as a foundation for e-coaching

3. Language as a powerful tool

Three pillars as a foundation for e-coaching

The three process elements that make e-coaching so powerful together form the basis. These are:

Working in anonymity accelerates the process of form and content within e-coaching. Social anonymity has an influence, according to research by Zajonc. This psychologist-researcher investigated and discovered that people start to behave differently as soon as a second person is present. The presence of outsider view is known to cause a certain amount of tension and alertness:

* Social facilitation is the principle whereby the presence of others during the performance of a task is experienced as positive. This occurs when performing easier tasks.

*Social inhibition is the principle whereby the presence of others during the performance of a task is experienced as negative. This occurs when performing harder tasks.

For e-coaching, changing behaviour and reflecting on difficult situations, it is fair to say that these are difficult tasks ... which means that anonymity has a positive effect.

Psychologically, pressure arises when social inhibition occurs. It can even be measured physiologically. As soon as suppressed emotions and thoughts can be expressed, there is release and this illustrates the phenomenon of disinhibition, with which recovery occurs.

The ability to open oneself up to unrestrained feelings and thoughts is often hindered by social pressure and fear of condemnation. Anonymity removes these obstacles, making a client feel freer to express himself.

Everybody has the basic need to act autonomously. Self-control and self-direction are better expressed in anonymity. The more anonymous and autonomous a client feels, the freer he is in practicing new behaviors.

The power of writing has been explored (Pennebaker). His research showed that writing has many positive effects. Both the cognitive and emotional processing of events occur. Having to structure and organize the story of the event causes a cognitive change.

A change also occurs emotionally because a process of getting accustomed to the event starts.

Well-being and health of clients improves significantly as a result of writing about disturbing experiences. It has a relieving and liberating effect. Writing gives meaning and strengthens self-reliance. The principles of inhibition and disclosure also work strongly with this.

The 3 pillars together comprise 15 separate components that speed up the process within e-coaching. The first eight are for coaching in general.

The following ingredients are mainly about the written text.

The ABC model for e-coaching shows the 3 (mostly sequential) theoretical phases of the e-coaching process. In practical terms, a loop is sometimes observed per (sub)learning objective because the achievement of a learning objective does not always follow steps A, B and C closely. 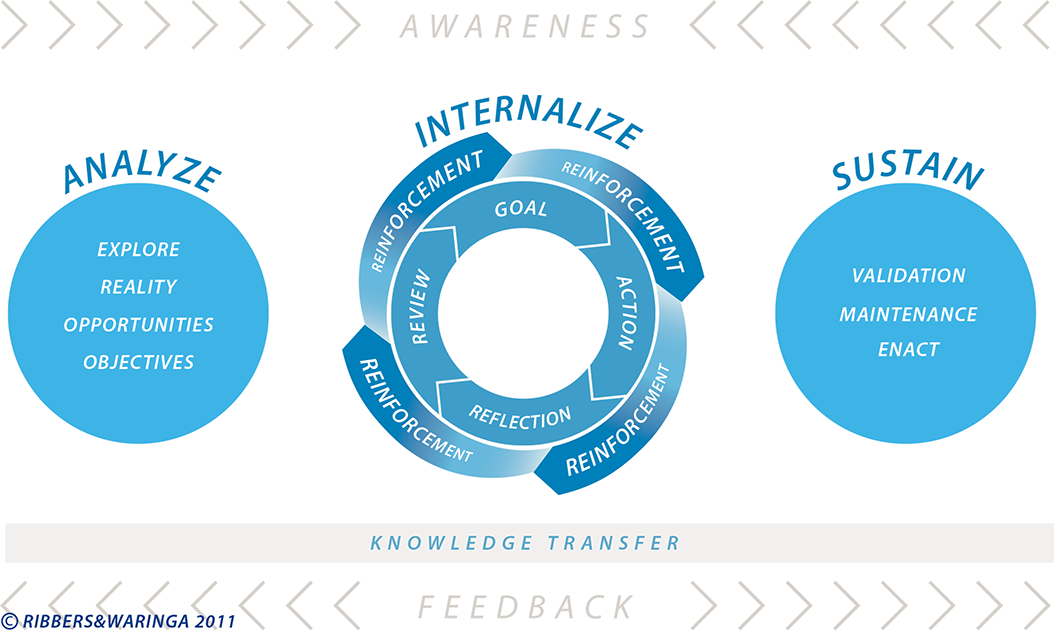 The core of the ABC model consists of the insight that changes (as opposed to false assumptions about this) are possible when realized in small steps (Stanford University). These small steps are a fundamental condition in strengthening motivation. In the realization of small steps there is a success in every step. That success intrinsically motivates and drives the client to the next step (reinforcement).

Another important insight on which the ABC model is based is that experience learning can be expressed in a new way in e-coaching: the client can practice in small steps in their own environment, reflect within e-coaching and then take the next step, with both feet, in practice.

The first step is to analyse and clarify the learning objectives of the client. Goals should be achievable and relevant, and the context in which they are to be achieved should also be clear here. This phase goes through the steps that are similar to those of GROW: investigate, explore the reality, possibilities and final goals.

Exploring the current situation, the reason and context and possibly the use of tools such as questionnaires or tests.

In the reality phase, the client examines his own assumptions, feelings and facts and places them in the present context. In this phase, the question behind the question often emerges, which often gives the client a new insight that can be experienced as a breakthrough..

Opportunities now present themselves and the client can explore them and discover what influence they have on his learning objective. He can identify assets and persons as resources. In this phase working from a solution-focused approach is more effective than thinking in terms of limitations.

This ultimately leads to the setting of concrete end goals. With these SMART end goals the client can enter phase B.

In this phase of internalisation, the client goes through his so-called client circle while practicing his goal, action, reflection and review steps until he has mastered his new behaviour (goal). Repetition, small steps and a high frequency of reflection with the coach characterize this phase.

The reinforcement circle that can be seen around the client circle drives the client circle. An active confirmation with compliments from the coach for the client will make the client feel supported and speed up his growth process. A similar process occurs when the client in his environment is confirmed in his new 'good' behaviour and that gives him (small) success experiences.

In the final phase, the assurance of the results in phase B is central. Three elements are central: validation, maintenance and execution.

Process elements in the ABC-model

Throughout the three phases of the ABC model, three process elements keep coming back: Awareness, feedback and knowledge transmission.

Awareness stands for the awareness of one's own self in relation to the environment and the interaction with the environment. Growth in consciousness provides new insights, which in turn offers new perspectives for action. This phenomenon returns at several moments in the model.

Feedback on the behaviour, attitude and experiences of the client by the coach provides a wealth of information that provides the client with input for self-reflection and thus also for a new action perspective.

Knowledge transmission can take place in the form of the submission of a model, a video or an explanation relating to an exercise. The transfer of knowledge can support the client in his understanding or provide an example of desired behaviour. This way, the client has an independent opportunity to improve.

Language as a powerful tool in e-coaching

The central theory in the methodology is the politeness theory of Brown & Levinson. The theory has proven to be universal and explains regularities that occur in the patterns of language use. These patterns arise because people take each other into account in their communication. Face retention is an important concept in this respect. Face retention plays a role in the human need for both dependency and independence in relationships. Due to our use of language (language acts) there is always a chance of imbalance and therefore loss of face. The politeness theory therefore leads to language strategies that can be used to guarantee facial preservation.

The use of language strategies depends on three factors:

The first factor, power balances, should - given the relationship between coach and client - play no role.

The second factor of social distance changes as the trajectory progresses. The distance then decreases. This means that the language strategy needs less and less decoration (fuss).

The third factor 'invasion of the act itself' is about entering someone's personal space by instructing or asking them to do something as a client. It requires sensitivity and careful use of language in order to use and remain polite.

Looking at the above-mentioned factors, forty language strategies can be deployed, divided into five main groups:

Numbers 1, 2 and 5 are relevant for e-coaching. I'll briefly explain them here:

The strategy with direct messages and use of positive relational resources is mainly used at the beginning of an e-coaching trajectory. It is an approach oriented strategy and reduces social distance. Communality, cooperation and meeting needs are at the heart of this. The positive approach creates a positive image of the transmitter and shows the transmitter’s sensitivity for the client's need for face retention. There are 15 approaches that can be used.

Directly and without fuss

This language strategy can be used if transmitter and receiver have a relationship of trust with each other. One feels free to communicate and the fuss (or dressing) is not necessary. This form often occurs later in an e-coaching process and is usually experienced as more personal. This language strategy has a disinhibiting effect and leads to openness and honesty. Both coach and client benefit from this strategy, because the coach builds up credit and the client experiences the trust he receives.

The refraining from action describes the active ignoring of something a client has written. Where this can lead to inconvenience in a face-to-face conversation, in e-coaching it is the possibility to consciously not react. This reinforces the ability to focus and endorses the usefulness of this strategy.

Before a language action such as the ones above can be used, a coach must first make an analysis of the client's language behaviour. The linguist Searle divides language acts into five main groups:

Where a text can sometimes be interpreted in several ways, language acts offer the possibility to classify parts of the text and thus give the coach the opportunity to interpret the condition of a client.

When sending a message as a coach, purposefulness and effectiveness are essential. Redundant ballast from a message should be avoided. Reading and reformulating a message is therefore an important part of e-coaching. Language philosopher Grice distinguishes four simple basic conditions for writing a goal-oriented and effective text. The four basic principles are:

Learn more about the theory? 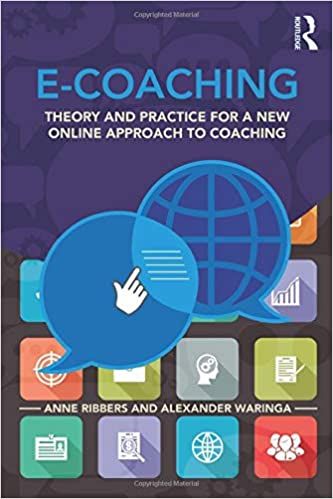 Want to learn more about e-coaching?

Then buy this book!

This artikel is based on this book by Alexander Waringa and Anne Ribbers.

Want to receive e-coaching yourself?

In an obligation free introductory meeting you get a taste of what it is like to be coached by me and you will immediately take the first step towards standing up for your interests.

Take a look at my fees first.

Tips and offers in your mailbox

In my e-mails you will get:

Subscribe. And if it turns out not to be for you, just unsubscibe.